Alan was the CSIRO Director of Institute of Animal Production and Processing from 1988 until his retirement in December 1994. He was an internationally recognized parasitologist with a special interest in the control of worm parasites in domestic livestock.

Alan Donald graduated from the University of Sydney with honours as a BVSc in 1956. He began his research career with CSIRO in 1960, joining the Division of Animal Health as a veterinary parasitologist in the McMaster Laboratory. 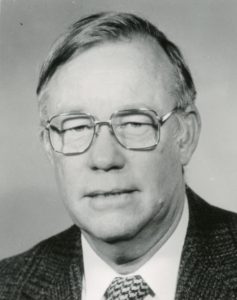 In 1966, he gained a PhD from Bristol University in the UK for work on nematode parasites of sheep and for the next 20 years he worked on the population biology of helminth parasites and the control of parasitic disease and production loss in sheep and cattle.

In 1981 he was made officer-in-charge of the McMaster Laboratory and a member of the Divisional Management Committee.

In 1983 he became the Chief of the Division of Animal Health. In announcing the appointment, the Chairman of CSIRO, Dr J. Paul Wild, said Dr Donald had made significant contributions to understanding changes in parasite numbers in animals.

“Dr Donald has made important studies of the epidemiology and control of parasitic worms in sheep and cattle. ‘This area of research will become increasingly vital when the current revolution in biology produces vaccines which require a specialized knowledge of the relationship between livestock and the parasites such as those studied by Dr Donald.” Dr Wild said.

Dr Donald also carried out a study of the effects of environmental factors on the development and survival of parasitic worms during the period of their life cycle spent on pasture. This work showed that the infective stages of the parasites on pasture lasted for much longer than was previously thought, and that the development rates during this ‘free living’ stage were slower than previously thought.

Dr Wild said. “Further research based on these findings has led to major improvements in parasite control, combining grazing management with the use of anti-worm drugs.”

1986 saw his appointment as Acting Director of the Institute of Animal and Food Sciences. He explained the aim of the new institute, “We will be emphasising longer-term strategic research for the benefit of the livestock industry and will focus on developing new technology for the improvement of farming productivity.”

He was also keen to improve the ‘off farm’ processing of livestock products lowering costs, making it more efficient – and developing value adding processes for livestock commodities produced in Australia.

Alan was appointed Director of IAPP in January 1988 and held the position until his retirement in December 1994. With his wealth of knowledge, he continued to advise the CSIRO Executive and stayed in touch with the organisation.

He won an AM for his service to primary industry in the field of animal health.

Alan Donald’s wife Nancy reflects on her family history with CSIRO. Her own father Alan Hackwell (1902-1967), joined CSIR in 1947 or 1948. He originally worked for the Victorian Department of Agriculture and left in order to work in London at the Australian Scientific Liaison Office. He returned to Sydney in 1959 and worked at the McMaster laboratory until he retired.

Nancy met Alan Donald when her father invited him home for dinner. As she says – What luck! They were married in 1961 and Nancy says, “I always feel that I am part of the CSIRO family.” 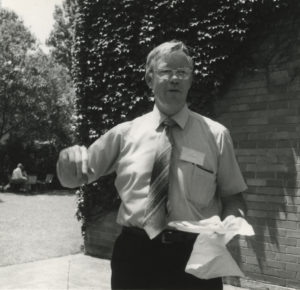