Dr David A. J. Rand – “50 years with CSIRO – a journey along the electrochemical road to sustainability”

My supervisor in Cambridge , a distinguished electrochemist, directed me towards CSIRO because, in his opinion, it had one the world’s best groups that were conducting research in this discipline. I found him to be totally correct and consider it fortunate to have been a member of CSIRO for the past fifty years.

I had accepted the position of Experimental Officer at the Division of Mineral Chemistry, as set out in the following notice.

Two notable items are the overwritten Not Advertized in the U.K. (so, how did the notice fall into my hands?) and the disgraceful lower salary rates for women. 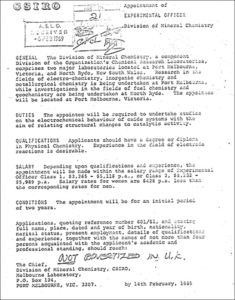 Two days before, on the Saturday, my wife and I had arrived as Ten Pound Poms aboard TSS Fairstar on a wet and most unwelcoming day at Port Melboure Pier. (CSIRO still owes me the £10). The voyage had taken 32 days (the Suez Canal was closed) and had proved to be challenging. 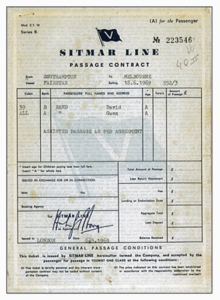 Dave Koch, the Deputy Chief of CSIRO Division of Mineral Chemistry, together with his wife Anne and two daughters, met us on the Sunday afternoon. “Where would you like to go”, he said. “ The coast or the hills?”.  Obviously, we chose the latter and went to the Dandenongs (still raining) for afternoon tea. Dave had forgotten to bring money with him, so now we were down to $1.80. ‘

Dave told me to front up to the Division mid-morning on the Monday and gave me instructions where to stand to get the No 8 bus to Garden City. Either the instructions were incorrect or I had misinterpreted them, no bus arrived. In desperation, I flagged a passing taxi and asked the driver how much would $1.80 take me.  The driver looked at the drenched vision in front of him (yes, the rain was still in full force), took pity on it and said “No worries, to wherever you are going.”

On arrival, I found the CSIR0 site deserted. Finally, I traced noises coming from a room in a far corner of the canteen. I opened the door to find a crowd watching the action on smallest black & white TV that I had ever seen. It was precisely 12.56 pm on Monday, 21 July 1969 Australian Eastern Standard Time (AEST) and at that moment I joined 600 million people watching mankind taking its ‘one giant leap’ as Neil Armstrong walked on the Moon.

After taking the mandatory oath of allegiance to Her Majesty Elizabeth the Second, Queen of Australia, Her heirs and successors according to law, etc., in ‘one giant leap’, I became a member of, arguably, the best-performing Division in the history of CSIRO. Between them, a small staff of around 150 enabled its scientists to be awarded six AMs, one AOM and one MBE.

My supervisor in Cambridge , a distinguished electrochemist, directed me towards CSIRO because, in his opinion, it had one the world’s best groups that were conducting research in this discipline. I found him to be totally correct and consider it fortunate to have been a member of CSIRO for the past fifty years.

…… and to all my colleagues who have assisted me on my journey along the electrochemical road to sustainability.