The 2021 Marshall Medal awarded to a CSIRO Alumnus

On January 6, Emeritus Professor Graeme Martin was presented with the 2021 Marshall Medal by the President of the Society for Reproduction and Fertility, the premier body for the discipline the UK. The Marshall Medal was established in 1963 and is the highest honour that can be awarded in the field of fertility and reproduction.

In an online ceremony that was part of the AGM of the Society, I made an acceptance speech in which I used a ‘science lineage’ to show how I was ‘descended’ from Marshall (Figure 1). This is not original idea … I stole if from a very old friend, Gareth Evans (ex University of Sydney). 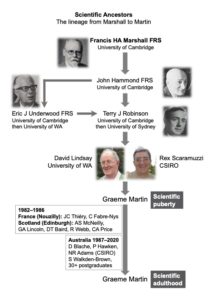 The Medal was named after Francis Marshall. He was based in the School of Agriculture at the University of Cambridge, from the turn of the last century and is generally considered to be the original reproductive biologist. According to his biographer: “Marshall was outstanding among the pioneers who were laying the foundations of what is now a major preoccupation of biologists” (doi: 10.1098/rsbm.1950.0015).

John Hammond (1889-1964) was supervised by Marshall and remained at the University of Cambridge. He was a physiologist, veterinarian, agricultural research scientist and a pioneer of artificial insemination. Importantly for the University of WA (UWA), and thus me, he supervised the PhD studies of Eric Underwood (1905-1980) who returned to Western Australia where he became universally acknowledged as a world leader in trace element nutrition.

Terry Robinson (1919-2004) was working at UWA with Underwood on phyto-oestrogens when Hammond visited in 1938 and was subsequently lured to Cambridge do his PhD under Hammond’s supervision. After returning to Australia, Robinson became the Foundation Professor of Animal Husbandry at The University of Sydney, where he supervised the PhDs of David Lindsay and Rex Scaramuzzi. In the 1960s, Lindsay joined the UWA staff in the Faculty of Agriculture, when Underwood was the Dean. After working in the USA and Scotland, Scaramuzzi ended up at CSIRO in Sydney in 1975, where he became involved in my PhD studies, for which Lindsay was supervisor.

The connection between me and the members of the lineage is deeper than this simple flow-chart suggests, because science is at its heart. In my PhD Thesis, I cited papers that Marshall had published in 1903 and 1937 … the latter being the first demonstration that the seasonal breeding cycles of mammals were controlled by photoperiod. I also cited Underwood’s descriptions of the ‘ram effect’ (1944), clover disease (1946), and the importance of zinc for testis function (1969). These discoveries in reproductive biology, along with those by Lindsay and Scaramuzzi in later years, underpinned my research career, and therefore my Marshall Medal.

The focus of Graeme’s research

My research focuses on analysing how the brain of the sheep measures the length of the night, body reserves of energy and immediate fee supply, and also assesses the socio-sexual surroundings, and integrates this information to formulate a strategy for successful reproduction. I have studied each of these individual environmental factors, but my real contribution was to consider them all at once, the way a sheep does. This approach led to me to realise that the interactions among the factors are often more important than the individual factors themselves.

Importantly, everyone in the lineage in Figure 1, from Marshall to me, studied the humble sheep. The sheep is important as a research animal for two reasons: it’s a mainstay of livestock industry, in Australia and worldwide, and it’s an experimental model for human reproductive biology. These two aspects have allowed me to attract funding from both industry as well as biomedical sources, to the benefit of my colleagues and students.

On the industry front, a greater understanding of how animals respond to their environment allows us to manipulate the environment to control the animals, rather than, for example, using hormone injections. This principle underpins the modern concept of ‘clean, green and ethical management’.

I grew up on my parents’ farm in Western Australia, graduated with a BSc (Agricultural Science) at UWA in 1975 and then gained a doctorate in reproductive endocrinology in 1981. After working at INRA in France and at the Medical Research Council in the UK, I returned to Perth to take up a joint position at UWA and the then CSIRO Division of Animal Production.

The Marshall Medal thus reflects an amazing journey for a farm boy from a small country town. Who could have predicted that? Actually, my father could have … he loved education and science and never pushed me to become a farmer.

To finish, I need to say that I did not do this by myself. I had help from supervisors, colleagues (all of whom I count as friends) and students (all of whom became colleagues and friends). They are too numerous to list, but they all gave me inspiration and fired my imagination. However, I must warmly acknowledge the almost 30-year collaboration with Assoc Prof Dominique Blache at UWA, one of the most creative scientists I know.