“Radio Astronomer – John Bolton and a New Window on the Universe”

Peter Robertson has recently published a biography of the Australian astronomer John Bolton who spent most of his career in CSIRO's Division of Radiophysics and who was an early pioneer of radio astronomy.

Read Peter’s article from ‘Australian Sky & Telescope’ and find out how Alumni members can receive a 20% discount on his book. 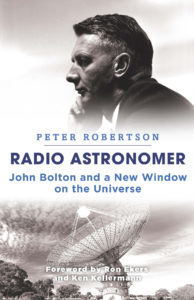 Possibly CSIRO’s finest achievement in the postwar years was the emergence of the Radiophysics Laboratory as a world leader in the new science of radio astronomy. It was the first occasion Australia had pioneered a major new branch in the physical sciences. The most prominent of the brilliant young group of Radiophysics scientists was a Yorkshireman who had arrived in Australia shortly before the end of WWII.

John Bolton is a name well known to Australian astronomers. The Bolton Symposium is held each year in Sydney and hosted by CSIRO’s Australia Telescope National Facility. The aim of the symposium is to showcase the research of postdocs and other early career researchers. And there is the famous Dish at Parkes in central New South Wales. The road running from the radio telescope to the residential quarters a kilometre away is known as John Bolton Avenue.

And yet Bolton remains unknown to the great majority of Australians. It seems odd that someone who played a leading part in the foundation of a new branch of astronomy, who was the inaugural director of two superb radio telescopes, and who was probably worthy of a Nobel Prize, has largely disappeared from the public mind.

Actually, many Australians do know something about John Bolton, but only indirectly. The popular film The Dish tells the story of how the Parkes telescope received the TV picture of the first moonwalk by astronauts Neil Armstrong and Buzz Aldrin. The lead role in the film was played by the well-known actor Sam Neill. By all accounts, Neill’s role as the unassuming, quietly spoken director of the Dish was an accurate portrayal of the real life director – John Bolton.

Bolton was born in 1922 in the industrial city of Sheffield. Both his parents were teachers and – unusual for the time – both had university degrees. In 1940 in his final year of high school John sat for the Cambridge entrance examination. Well coached by his father, John passed the examination with flying colours and won two scholarships to study science at Trinity College in Cambridge. However, because of wartime conditions his three-year degree was crammed into two years so there was little opportunity to enjoy student life.

After graduating Bolton joined the navy and saw service as the radio officer on board a British aircraft carrier. When the war ended John was based in Sydney and he decided not to return to England, partly because Sydney’s climate had cured him of the asthma he had suffered as a boy. Immediately after his discharge from the navy he joined the Radiophysics Laboratory, part of the CSIRO.

John Bolton in 1940, the year he entered Trinity College, Cambridge. After World War II, he became a pioneer of radio astronomy both in Australia and the US.

From radar to radio astronomy

The Radiophysics Lab was formed during the war to carry out secret research on radar for the military, but with the end of the war the Lab decided to investigate a number of peacetime applications of radar. One area of investigation was a discovery made before the war by Karl Jansky, a young physicist at the Bell Telephone Labs in New Jersey. Jansky detected radio waves from space, coming from all directions of the sky, a phenomenon he named ‘cosmic noise’. Astronomers didn’t know what to make of the discovery, but thought the emission might be caused by the interaction of high speed particles in interstellar space.

After joining the Lab Bolton was posted to the Radiophysics field station at Dover Heights near the entrance to Sydney Harbour. His first assignment was to investigate Jansky’s cosmic noise. Working with colleagues Gordon Stanley and Bruce Slee, Bolton set up a number of Yagi aerials similar in appearance to an ordinary TV aerial.

The group was able to show that Jansky’s noise could be broken up into many point-like sources of radio emission. Over the next three years the group discovered over one hundred of these strange new radio sources. The big surprise was that many of these objects were not, as one might expect, relatively close to our Solar System, but were at vast extragalactic distances, pumping out huge amounts of energy at radio frequencies. The existence of these objects came as a complete surprise to astronomers. The discovery marked the birth of a new field – extragalactic radio astronomy.

The discovery was remarkable in another way. John Bolton had never studied astronomy and didn’t have a PhD or any training in research. It seems almost inconceivable today that anyone so completely unqualified could be the founder of a new branch of science.

Another remarkable feature was the rapid progress of Bolton’s career. When he joined Radiophysics in 1946 he began on the lowest rung of the research officer level, but with a series of double and triple increments he rocketed up the research ladder. In 1954, at the age of 31, he was promoted to the position of Principal Research Officer, becoming the youngest scientist in CSIRO appointed to this grade.

Bolton and the wartime blockhouse at Dover Heights in Sydney. The Yagi aerials were used to discover the first discrete radio sources.

The ‘hole-in-the-ground’ telescope at Dover Heights was used to show that the strong radio source Sagittarius A is the nucleus of our Milky Way galaxy. 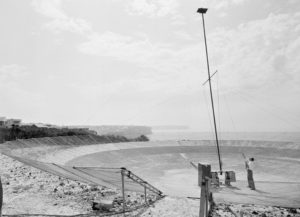 By the early 1950s the Radiophysics Lab was the world leader in radio astronomy, operating not just at Dover Heights but at another half dozen field stations around Sydney. Other smaller groups were founded in England and The Netherlands but, surprisingly, the Americans did not follow up on Karl Jansky’s original discovery. That changed in 1955 when the California Institute of Technology in Pasadena announced it planned to build the finest observatory for radio astronomy in the world. The man Caltech headhunted to build the observatory was John Bolton.

The site chosen for the new observatory was in the Sierra Nevada mountains, north of Pasadena, where it would be isolated from manmade sources of radio interference. Bolton designed an instrument known as an interferometer, consisting of two large dishes mounted on a railway track so the distance between the two dishes could be varied. The interferometer could be used not only to discover new radio sources, but also to determine the shape and the structure of the sources.

In 1960, a few months after the completion of the observatory, Bolton shocked the hierarchy at Caltech when he announced he was returning to Australia. Caltech had recently promoted him to the position of professor of radio astronomy – the first chair in radio astronomy anywhere in the world – and it was just assumed that John would continue indefinitely as director of the new observatory. 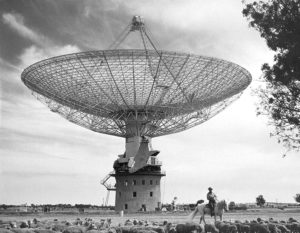 So why would Bolton walk away from the finest radio astronomy observatory in the world – one that he had created? The answer is that because he was about to take charge of an even more powerful radio telescope than the one at Caltech – the Parkes telescope in New South Wales.

In 1960 Bolton returned from a flourishing career in the US to become the inaugural director of the Parkes Observatory. Under his leadership the  ‘Dish’ became one of the most successful scientific instruments ever built.

The Parkes dish was designed and built during Bolton’s time at Caltech and it was very much an international project. Half the funding came from the Carnegie and Rockefeller Foundations in the US, while the design of the telescope was done by the firm of Freeman Fox in London. The firm was well known in Australia, and in fact it was the firm’s founder, Sir Ralph Freeman, who had designed the Sydney Harbour Bridge, the most iconic structure in Australia.

Bolton was appointed the inaugural director of the Parkes dish and it was here that he spent the remainder of his career until his retirement 20 years later. During this time the astronomers at Parkes discovered many thousands of new radio sources, most of which were either distant radio galaxies or even more distant objects known as quasars.

On Bolton’s retirement in 1981, his close friend and CSIRO chairman, Paul Wild, commented: “Your achievements in radio astronomy are among the greatest in Australian science. No one will doubt that your finest hour was in the late 1940s when from Dover Heights you discovered the first radio sources known to mankind. The discovery set off the great new revolution in astronomy in the second half of the 20th century.”

Bolton with NASA’s Bob Taylor in the control tower at Parkes during the Apollo 11 moonwalk in 1969. 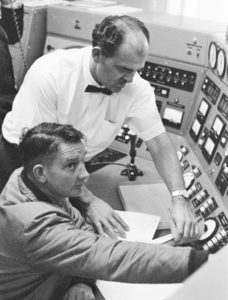 There were many who thought that Bolton’s discovery of radio sources was worthy of a Nobel Prize in physics. The problem was the Nobel committee in Stockholm judged that astronomers were ineligible for the physics prize. Astronomy and physics were considered to be separate disciplines and, as a result, no astronomer had ever won the physics prize.

In the 1970s, under pressure from the international community, the Nobel committee decided to alter its policy. The prize could now be awarded, not for ‘astronomy’ but for discoveries in the field of ‘astrophysics’. However, by then Bolton’s discovery of radio sources, made nearly 30 years earlier, had faded from view. Since then a significant number of astronomers have been awarded the physics prize, including Brian Schmidt at the Australian National University.

If astronomers had been eligible in previous years, then perhaps today we’d remember John Bolton as the first Australian astronomer to win the Nobel Prize.

Peter Robertson is an honorary research fellow in the Astrophysics Group at the University of Melbourne. This article is adapted from a talk given on the ABC’s Ockham’s Razor. Photos are courtesy of CSIRO’s Radio Astronomy Image Archive.