One woman’s passion, personality and drive has helped launch more than 100 Tassie businesses

As an animal loving child raising a menagerie of guinea, pigs, chickens and rabbits in her suburban backyard Hazel MacTavish-West planned on becoming a vet.

But after missing out on vet colleges by just one point, she followed a pathway to agricultural science which has since seen her travel back and forwards across the globe before her passion for helping others became a successful business when she launched Seedlab Tasmania.

The company that supports start-ups has enabled scores of Tasmanians with great idea blossom.

Moreover, Seedlab Tasmania has recently gone national with the support of a major supermarket chain meaning the number of businesses and people it can help will continue to grow.

“We have built community, despite the pandemic. And we have created outcomes for businesses that were beyond their wildest dreams.” 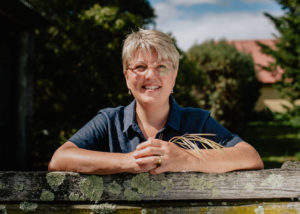 Dr MacTavish-West emigrated to Australia as a five-year-old with her family from the North-East of England in 1975.

Growing up in Kingston, she believed her future was beyond Tasmania and headed to Sydney in the late 1980’s where she studied agricultural science, later switching to a completely plant-focused study career.

“I focused on all the things in plants that make them flavoured, coloured and bioactive,” Dr MacTavish West said.

“I never looked back.”

Dr MacTavish-West had a diverse scientific career working at the CSIRO marine labs in the early 1990s and then completed three years of PhD studies and five years of post-doctoral research at the University of Tasmania. Here she was under the guidance and mentorship of Emeritus Professor Bob Menary. “Bob taught me the value of constantly questioning things. And not giving in.”

She met her husband James on a trip to the highlands of Scotland and eventually he followed her back to Tasmania where they had two daughters. In 1999 the family of four moved to the United Kingdom to follow their matriach’s dream to “work in a bigger fish bowl” by joining the postharvest research group at Wye College in Kent.

“I didn’t enjoy academia in the UK as it was too removed from the industry. I left and joined ADAS (which is a bit like DPIPWE here).”

“I built a team and we had diverse projects, everything from growing marshmallow plants hydroponically to extract their roots for water soluble anti-ageing chemicals to assessing the fragrance of different varieties of scented Narcissi on the Isles of Scilly. They were heady days for me,” Mrs MacTavish-West recollects.

She said a highlight of this period was linking up with a major fragrance company, Frutarom and introducing them to the floral extract from Tasmanian-grown brown boronia. The company went on to use this in a shampoo and conditioner under the Original Source brand.

“I am very proud to have been part of this connection. Helping industry profit from science has always been a driver for me.”

Dr MacTavish-West spent several years working as a consultant and launched her own range of personal care products that were truly plant based back in 2005 before “it was trendy.”

“Sadly, I learned the hard way how hard it is to crack into commodity markets and how expensive it is to start a business from scratch and make it successful. After four to five years I shut the doors on that company and licked my financial wounds.”

It was time to move back to Tasmania with her daughters and second husband Darren West.

Dr MacTavish-West decided to pour her experience into another business venture, this time providing consultancy services to the vegetable industry Australia wide. In 2012 her hard work paid off, being awarded the Telstra Start Business Award for Tasmania.

The rest, as they say, is history.

Dr MacTavish-West’s passion for helping others and using science and her own experiences and knowledge to grow business ideas saw her work with a range of now household names such as Houston’s Farm which put packaged salad leaves on supermarket shelves and Daly Potato Co which developed potato salad, vodka and gin to value add to waste products. Ashgrove Cheese took their dairy delights and turned them into different flavoured AmazeBalls.

The determined, self-starter was awarded a Winston Churchill Fellowship in 2017 where she explored food innovation across the United Kingdom and Europe. Ten weeks of travel later and 6000 photos and Dr MacTavish-West’s commitment and drive to think bigger took on another life.

“Seedlab Tasmania was born out of the belief that by networking and bringing in industry experts on diverse subjects, we could help start-ups not have to reinvent every wheel themselves,” she said.

“I had a constant stream of people coming to the office to ask for help with things like packaging design, getting labels correct and legal, extending shelf life of products, getting flavours right on all sorts of food and beverage products. All were presale and so had no money.”

“Over the last 2 years and after a few false starts we have built a highly functional, enthusiastic and skilled core team of five to six people, and our participants have created 62 new full time jobs for themselves and others.

A recent investment of $4 million by Woolworths has launched the Seedlab idea onto the national stage.

“We have just completed our first Seedlab Aust “Bootcamp” over three weeks with 60 plus businesses throughout Australia and New Zealand. I love every single thing about my job.”

“My phone buzzes and my email inbox pings constantly with news of everything from new grants, new sales, new distributors, new shops, new connections and new life. I’m often the person people contact before they even tell their mum!”

“I have absolutely found my thing.”

Applications Close for Round #3 of Seedlab Australia Bootcamp at 9am AEST Wednesday the 20th of April, 2022.