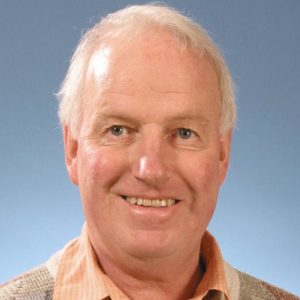 After attending Scotch College, David Batten graduated from the University of Melbourne in Civil Engineering. In the aftermath of the collapse of one of the approach spans of the Westgate Bridge while it was being constructed, David was employed by the CSIRO Division of Building Research on its Highett site to assist Ray Toakley evaluated the safety of the original design. Ray and David then evaluated the safety of the design for the new Brisbane River Railway Bridge. They discovered that there was a problem with the design. This occurred not when both trains where entirely on the bridge but when each train was only partly on the bridge. David and Ray were part of a group headed by John Brotchie and later by Ron Sharpe. This group was using their techniques for analysing large scale engineering structures, to optimize the design and layout of urban developments, and after his work on the bridges was complete, David moved into this research area. David and Jenny Wundersitz visited Sweden in 1978 so that David could further his research in this new research area and commence his study for a doctorate. David and Jenny moved to Umea in Sweden in 1986, where David took up a full professorship after managing to be made redundant from CSIRO.
David was best man at the wedding of Elizabeth Currer to John Davy on the 18 September 1975.
The CSIRO Division of Building Research had a group of employees who played squash from 5:30 to 6:30 pm each Wednesday afternoon at the now demolished A1 squash courts on the corner of South Road and Chapel Road in Moorabbin. Four members of this group then used to meet at 8 pm to play bridge each other’s houses in turn and bring masked bottles of wine. The person who had brought the masked bottle that was being consumed at that time would ask the other three people questions and give three possible answers for each question. Once each person’s masked bottle had been consumed the host for the night would provide extra bottles. The greatest number of bottles ever drunk in a single night was seven. The bridge bidding became more adventurous as the night wore on! The main four bridge players were David, Paul Walsh, Selwyn Tucker and John Davy. At times Ron Sharpe, Julius Beretka and Joe Flood filled in when one of the main four players was unavailable.
The squash afternoons led to the creation of a CSIRO Division of Building Research squash team in F grade which played out of the Mulgrave Country Club squash courts for one season. This team won the F grade premiership. The black and white photograph shows four members of this squash team at the west entrance to Building 33 on the Highett site of the CSIRO Division of Building Research. From left to right, the team members are Ron Sharpe, John Davy, David Batten and Rex Harrison. David’s office was at this west end of Building 33 on the first floor on the south side where the external fire stairs are in the photograph.
David inherited a small wine collection which contained some very early bottles of Penfolds Grange Hermitage. David used to subscribe to the Melbourne Theatre Company with Elizabeth and John Davy. On one occasion after returning to David’s house after attending a Melbourne Theatre Company play, a bottle of 1952 Grange was consumed. On another such occasion, a bottle of 1953 Grange was consumed. David built up a large and impressive wine collection. Heb gradually became more interested in Bordeaux wines and became involved in a group, including Sam Chafe, which used to taste Bordeaux wines. Later his interest shifted to Champagne. David used to host a Christmas Eve function at which each attendee had to bring a bottle of Champagne. Fortunately, eventually the date of these functions changed to New Year’s Eve. Later again, David’s interest shifted to wines from Burgundy, and he joined a group called the Knights of Burgundy. When, after a lapse of some years, David hosted his New Year’s Eve event for one last time to celebrate various anniversaries which totalled to 159 years, the requirement was for each person to bring a bottle of Champagne or a bottle of Burgundy. As well as red Bordeaux wines, David was also interested in French Sauternes. He loved to drink Chateau Yquem, which is normally drunk with dessert, with crayfish when the prices allowed.
David loved holidaying in France and often used to rent a property as a base and hire a Citroen 2CV to drive about in. 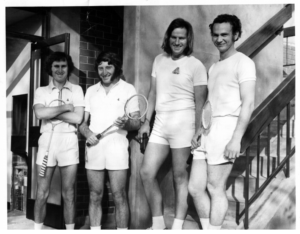 The black and white photograph shows four members of this squash team at the west entrance to Building 33 on the Highett site of the CSIRO Division of Building Research. From left to right, the team members are Ron Sharpe, John Davy, David Batten and Rex Harrison.

Dave was an esteemed colleague and friend from my 1977 appointment in the CSIRO Division of Building Research to my departure in 1993 and beyond. Like many scientists he had a lifelong passion for good wine, and I first met him as Wine master and President of the Highett Wine Club, and in meetings of the globally recognised Systems Modelling Group at DBR. We shared common interests not just in mathematical modelling but as well in economics, social science, and business. At that time, he completed a Master’s Degree interviewing CSIRO scientists and comparing their relative attitudes to personal achievement and to progress in science, while working more generally on structural design of steel buildings and beginning his career in systems modelling. He was one of a number of talented researchers who were initially appointed as Experimental Officer and later had some difficulty transferring to the elite Research Scientist stream once qualified.
A lecture by a visiting Swedish senior academic in late 1977 greatly excited both of us. I wrote a long letter expounding a number of innovations and alternative mathematical approaches to the subjects Professor Andersson had raised. Dave wrote welcoming Professor Andersson and asking could he do a PhD in Sweden. Within a few months Dave was on his way to Sweden while my letter remained unanswered. From then on, I left research negotiations to Dave.
Dave travelled backwards and forwards to Sweden and Europe completing his PhD and producing publications with Swedish colleagues. At one point I quipped if he went abroad any more often, he would meet himself coming back!
He was made the first DBR representative at the nascent consulting company SIROMATH, where he learned the business of commercial research. In 1984 we came up with a project entitled “Competitiveness of the Australian Building Industry” which we thought would be a career-maker. The building industry was less enthusiastic, regarding competitiveness as none of CSIRO’s business, and our introductory letter was passed around one company as an example of bad writing! In 1992 however I wrote up an expanded version as a consultancy study for DFAT.
Soon the Chief tired of Dave’s constant travel – which was however necessary to the furtherance of his international career. First-round redundancies were announced at DBR. Dave was abroad, and knowing he was about to be offered a full Professorship in Umea Sweden, as Officer’s Association representative I negotiated him a lucrative package. He was the first officer in DBR to be declared redundant despite producing the most papers in the Division that year.
Consultancy enabled all of us in CSIRO to travel much more frequently. We met at various times abroad in hilarious episodes – once at Kiruna in the Arctic Circle, once in Hawaii for the Australia-Japanese Regional Science Friendship Society, and another time at a hilltop chateau gatehouse in Autun, Burgundy during the summer break when Dave often holidayed in France.
In 1993 Dave and I won a large contract to provide a seminal model of the building industry for the Malaysian government, which would have been our largest modelling job together. Unfortunately, it fell apart when I left CSIRO for the United Nations.
After the term of his professorship concluded, Dave returned to Melbourne in semi-retirement where he invested with various degrees of success in futures, French wine, and Lloyds Insurance. He continued his ebullient hospitality, most notably through his famous Christmas Eve parties where the usual entry was a bottle of quality vintage French champagne.
Later on, despite the redundancy, Dave was able to take consultancy positions with CSIRO on energy modelling, and eventually he obtained an appointment in Marine and Atmospheric Research. He continued to publish strongly and eclectically throughout his career on subjects as diverse as regional and urban economics, spatial demand functions, evolutionary economics, complex human systems, microalgae, and electricity market simulation, leaving 121 refereed publications with over 2300 citations.
Sadly, Dave succumbed prematurely, unexpectedly to most of us, in late 2020. We will continue to miss his conviviality and good humour and his good fellowship, kindness and positive approach to the research community and the world in general.

David was always very proud of his time in Sweden, where he completed his PhD and rose to be Professor of Infrastructure Economics.  He was uncomfortable in the rigid academic disciplines that universities enforce, so that when he returned to Australia he was delighted to work with CSIRO and its complex system network.  The book that he wrote: Discovering Artificial Economics: How Agents Learn and Economies Evolve illustrates this polymaths approach, as it deals with examples from evolutionary game theory, stock markets, and urban and traffic planning.

David socially was great fun.  He liked fine wine and the fine food that goes with it. When he visited Paris, he meticulously planned his itinerary based on the location of Michelin starred restaurants. My last meeting with him, just before the CV19 lockdowns, was in September 2019 at the National Roads and Traffic Expo in Melbourne, where he was a speaker representing CSIRO.  I had retired from CSIRO by then so that I greatly valued our lunch together where I caught up on what was happening inside the organisation.

There was always enjoyable conversation to be had while dining-out and tasting fine reds. For a few years, we shared books of vouchers – fairly split between us – to enjoy a multitude of Melbourne restaurants. It must have been around that time that my own interest in sports-cars was instrumental in him buying his red MGB. I recall several occasions at his (and 1st wife Ros’s) house where David would play a recording of some favourite Jazz piece and expect the band to be identified! We also played an intriguing board-game which simulated the operation of a nation-state (and perhaps foreshadowed his later academic interests).

Above all else though, I remember his meticulously crafted hand-writing; arguably the neatest I have encountered and wondered – even then – if there is a link between neat and careful writing and equivalent thought process?

His death clearly came too early.

In June 1986 I arrived by air late-morning in Umea, Sweden after a detour around Russia because of Chernobyl. Dave picked me up at the airport and drove me back to the house where he and Jenny were living. I had a few hours sleep before going with them both for the formal celebration of Dave obtaining his PhD. It’s a very big deal in Sweden with many friends and colleagues being present and many speeches going back to Dave’s boyhood. As we had all consumed a lot of wine, we ended up walking back to their place after midnight, with the midsummer sun starting to appear above the horizon. It was such an adrenaline rush that I didn’t feel any jet lag. A few days later I celebrated my 50th birthday with them. Whilst it was not quite the same as celebrating it with family at home, it came a close second.