Des Nelson – ‘CSIRO and me’

Des’s first encounter with CSIRO in the Northern Territory was as a young jackeroo on Elkedra Station in 1954.  CSIRO staff were visiting in an Austin Champ which got bogged.  Des had just learnt to drive and proudly extricated the researchers with an ex-WWII Chevrolet Blitz.

And so began an association with CSIRO that was to last his working life and well into retirement.

Des returned to his home state, NSW, the following year and shortly after, got a job as a Technical Assistant with the CSIRO Division of Entomology at Black Mountain.  In “Life with CSIRO”, Des chronicles his time collecting bugs and enjoying life in Canberra, then a large country town, through much of 1955.

However, the Territory was now in his blood and in November 1955 Des returned to join the CSIRO research laboratory in Alice Springs.  “CSIRO and me” describes the next 37 years of Des’s career as a dedicated Technical Officer with both the former Northern Territory Administration and CSIRO.  Des continued to assist CSIRO staff with field work following his retirement (in 1990) until concluding this memoir in 2001.

“CSIRO and me…Science In the Centre” by Des Nelson

Des loved the wide-open spaces of central Australia and had a natural affinity for field work.  He kept a detailed diary and has drawn on those records, numerous photos and his amazing memory to give us a remarkable history of CSIRO in the Centre.  Of course, times change and Des’s one lament was that he was left behind by technology:

Computers were becoming more and more the instruments of analysis ….  Attempts were made to get me to become a computer operator, but I was not made for this.  …  I would look out the window at the open spaces and say to myself “why aren’t I out there?”  So I decided to take early retirement at 55, which came due in mid 1990.

Join Des as he relives his working life in “CSIRO and me”. 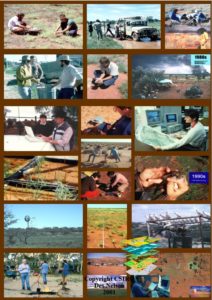